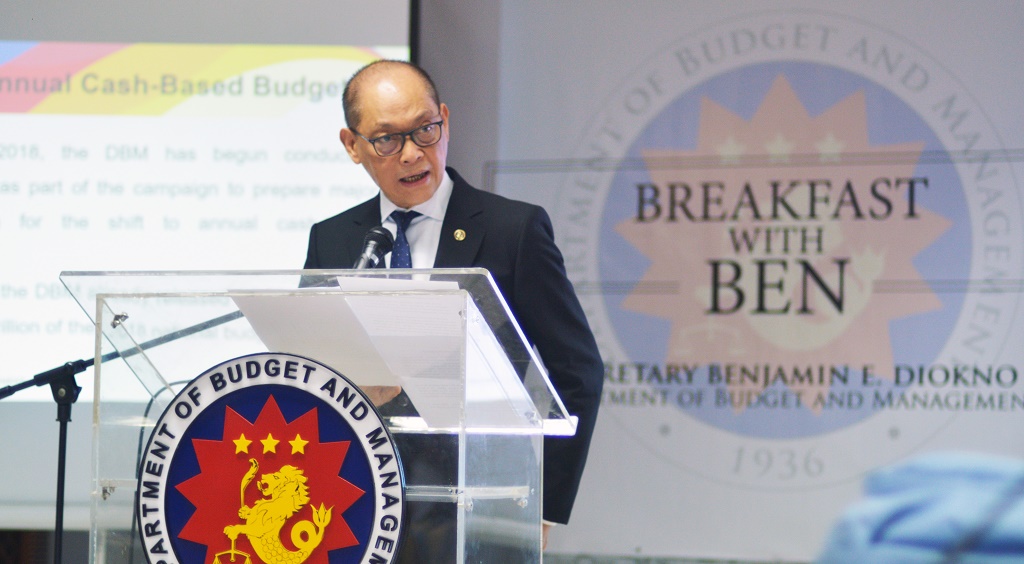 DBM Secretary Benjamin Diokno talks with members of the media during Breakfast with Ben on February 28, 2018  at the DBM Office in Manila.

Line agencies of the government are in position for the landmark shift from multi-year obligations-based to annual cash-based budgeting in Fiscal Year 2019, according to the Department of Budget and Management (DBM).

Through the briefings, agency heads obtained a deeper understanding of the operational implications of annual cash-based appropriations and the transition process for the current year (2018) where agencies were requested to implement the 2018 budget as if it were a cash-based budget.

In 2017, DBM implemented the one-year validity of appropriations instead of the usual two years to push the agencies to speed up the execution of projects and prepare them for the transition to annual cash-based budgeting in FY 2019.

The shift to annual cash-based budgeting is a major component of the Budget Reform Bill being pushed by DBM, together with Department of Finance (DOF), Bureau of the Treasury (BTr), National Economic and Development Authority (NEDA), and Commission on Audit (COA). The bill aims to modernize the national government’s budget process, eliminate underspending, and institutionalize many of the reforms introduced and currently being implemented by the Executive branch.

The Bill has been filed in both chambers of the Congress under House Bill 5590, by Reps. Karlo and Jericho Nograles, and under Senate Bill 1450, by Sen. Loren Legarda. On February 27, the bill was approved by the House of Representatives Committee on Appropriations. It will then be discussed in the House plenary on the first week of March.

The Budget Reform Bill and the shift to annual cash-based budgeting are especially significant in the context of the Duterte administration’s expansionary fiscal policy, where spending for social services and infrastructure is intended to increase significantly.

Shifting to annual cash-based budgeting is expected to speed up the government’s budget utilization and promote disciplined management of the budget. Also, as it shows disbursements rather than obligations or commitments, a cash-based budget tends to reflect more accurately the annual outputs and actions of the government.

In January, DBM already released 78.8% or P2.97 trillion of the P3.78 trillion of the 2018 national budget. Furthermore, the recently released full-year data for FY 2017 showed a continuation in the decline in underspending, posting an underspending rate of 2.4%, if interest payments are excluded from the computation to account only for productive spending.

"The lower underspending rate is a result of what we started last year which is to shorten the validity of appropriations to one year. Because of this, agencies are compelled to expedite the implementation of their projects and programs. They were also required to include only projects that are shovel-ready," said DBM Secretary Benjamin Diokno.

In previous years, the underspending rate was as high as 13.3% in 2014 and 12.8% in 2015. This was significantly decreased to 3.6% in 2016 when the Duterte administration took over. Since then, various reforms that push agencies to accelerate budget utilization have been pursued by the administration, resulting to the notable decrease in underspending. The Department targets to completely remove underspending in the coming years.