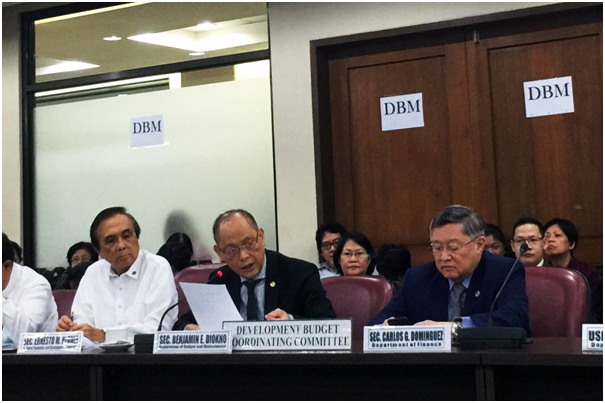 Representatives featured the members of the DBCC as they discussed and addressed queries regarding the various economic plans and government reforms related to the FY 2018 National Budget.

During the hearing, the DBCC maintained that the Philippine economy will continue to expand, with the GDP expected to advance by 6.5% to 7.5% in 2017, and a projected 7% to 8% GDP growth rate in 2018. Dubbed as one of the fastest growing economies in Southeast Asia, the Philippine economy is anticipated to expand by 50% by 2022 with these sustained growth rates, thereby achieving higher middle income status by the end of the Duterte administration.

Notably, the GDP growth from the last three and a half decades was monotonically upward. The economy has also been driven by structural transformation, which means that investment and consumption are the main determinants of growth. The country’s total factor productivity has also been fastest in the ASEAN region. These three reasons, as highlighted by the DBCC, imply that the Philippines’ economic growth is sustainable.

DBM Sec. Diokno also highlighted that the administration’s expansionary fiscal policy will allow us to have more fiscal space towards the full actualization of high-value government plans such as the ambitious ‘Build, Build. Build’ infrastructure program. Particularly, the expansionary fiscal policy would allow the Philippines an additional spending of PHP 2.2 Trillion until 2022. The DBCC is confident that the government’s fiscal plan is manageable and sustainable. In fact, Sec. Diokno emphasized that the findings of the debt sustainability analysis of the International Monetary Fund (IMF) support the Philippines’ fiscal program.

Sec. Diokno also notes that the ‘Build, Build, Build’ Program will provide 1.1 million direct employment every year until 2022, as the government continues to increase its infrastructure spending towards 7.3% of GDP by 2022.

The Budget chief also gave an overview of the proposed Budget Reform Bill (BRB) and the National Government Rightsizing Act. The BRB will modernize the budget system to address gaps in the Public Financial Management system. Mainly, the BRB proposes a shift from obligation-based budgeting to cash-based budgeting, which is projected to hasten the implementation of government projects and improve the efficiency of government agencies.

Meanwhile, rightsizing will ensure an effective and efficient delivery of public services, through the streamlining of functions of government agencies. Sec. Diokno notes that the savings of the government due to rightsizing can be better used to fund appropriate expenditures.

In terms of the FY 2018 National Budget, DBM Sec. Diokno emphasized that the PHP 3.767 Trillion budget comprises 21.6% of the projected gross domestic product (GDP) for 2018. The proposed budget is a 12.4% increase from the 2017 budget of PHP 3.35 Trillion. In line with the Duterte administration’s thrust to reduce poverty and promote economic growth, the largest allocations will go to the education sector and the infrastructure development program, ‘Build, Build, Build’. A total of P691.1 billion makes up the combined budgets of the Department of Education (DepED) with PHP 613.1 Billion, the Commission on Higher Education (CHED) with PHP 13.5 Billion, and State Universities and Colleges (SUCs) with PHP 64.6 Billion.

Meanwhile, PHP 1.097 Trillion has been set aside to support the ‘Build, Build, Build’ Program. This amount is an increase of 27.8% from its 2017 adjusted level of PHP 858.1 Billion. The allocation puts the infrastructure budget at 6.3 percent of GDP next year in line with the administration’s emphasis on infrastructure development.

The Budget Briefing will continue until August 14, as representatives of departments and government agencies correspondingly discuss their expenditure levels and budget proposals to the members of the Congress.