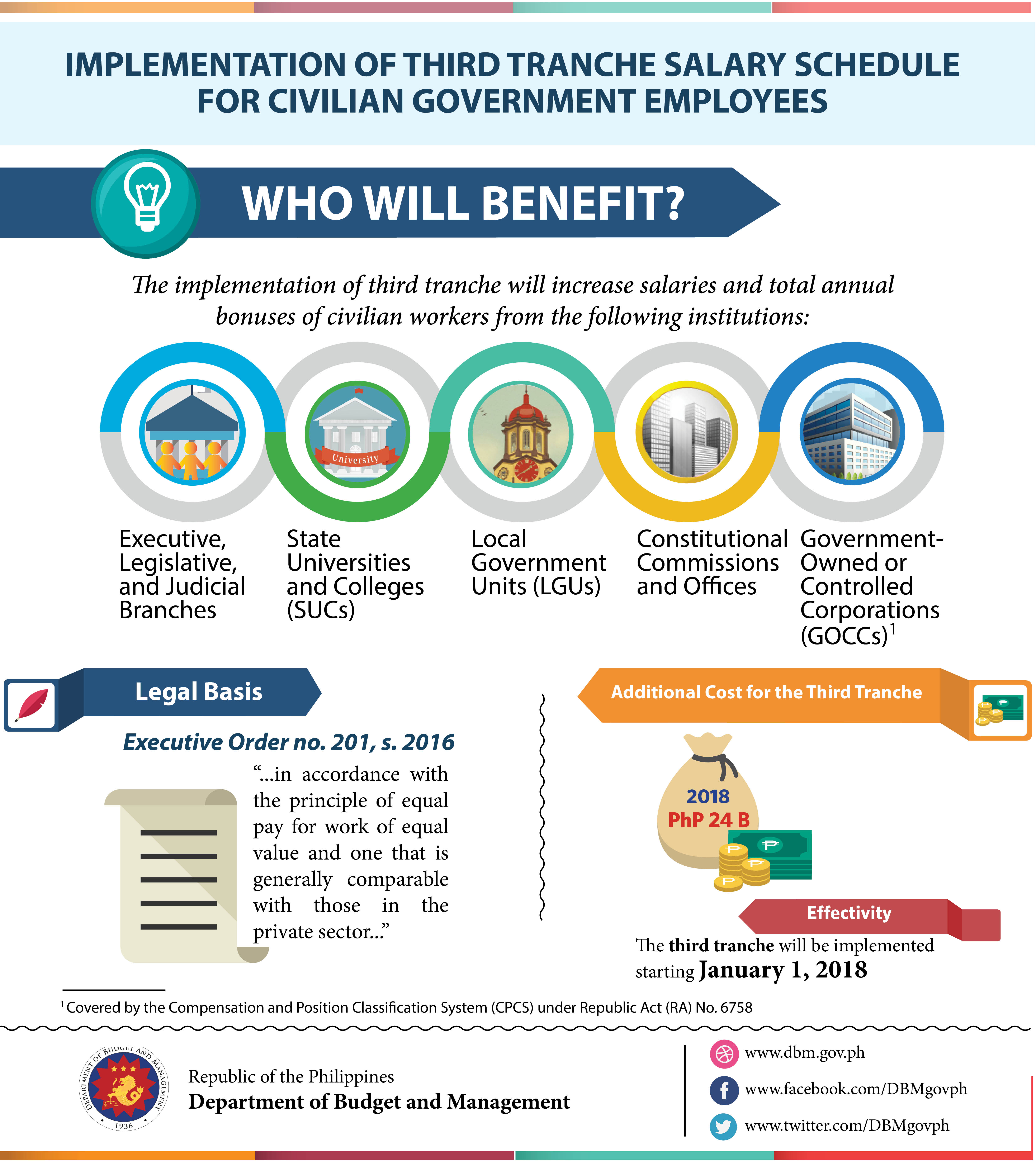 Approximately P24 billion has been set aside in the 2018 proposed budget for the third tranche of salary increase for around 1.2 million civilian government workers, according to Secretary Benjamin E. Diokno of the Department of Budget and Management (DBM). This is pursuant to Executive Order (EO) No. 201, s. 2016, which grants a compensation adjustment for government workers to be given in four (4) tranches.

The third tranche will be implemented starting January 2018 and will effectively increase the compensation package of all civilian workers in the Executive, Legislative, and Judicial Branches; Constitutional Commissions and Offices; and state universities and colleges (SUCs).

Government-Owned and Controlled Corporations (GOCCs) covered by the Compensation and Position Classification System (CPCS) under Republic Act (RA) No. 6758, as amended; all positions for salaried Local Government Units (LGUs); and all positions for barangay personnel paid a monthly honoraria are also included in the compensation adjustment scheme.

Meanwhile, a draft Joint Resolution (JR) authorizing the increase in base pay of military and uniformed personnel (MUP) was endorsed by the Executive Branch to the Senate President and House Speaker. Once approved by Congress, the Joint Resolution will pave the way for the increase in base pay of all military personnel of the Department of National Defense (DND) and the uniformed personnel of the Department of the Interior and Local Government (DILG), the Philippine Coast Guard (PCG), and the National Mapping and Resource Information Authority (NAMRIA).

Government workers, aside from the increased basic salary, will continue to receive standard allowances and benefits, such as a mid-year and a year-end bonus, each equal to one (1) month basic salary, cash gift, and the Productivity Enhancement Incentive (PEI).

The four-tranche salary increase, however, does not cover government agencies, including GOCCs, that are exempted from RA No, 6758, as amended, GOCCs governed by the CPCS established by the Governance Commission for GOCCs (GCG) and approved by the President, and those hired without employer-employee relationship and funded from non-Personnel Services appropriations.