For the month of June, national government spending posted an impressive 22.6 percent growth rate (compared to June 2016), the highest increase so far in FY 2017. This places disbursements at about P1.331 trillion for the first semester, with a minimal shortfall of 0.4 percent vis-a-vis the programmed P1.337 trillion disbursements. This also raises national government spending by 9 percent for the first semester year-on-year.

The accelerated spending in June is attributed to the robust growth in Current Operating Expenditures and Capital Outlays, which increased by 18.4 percent and 34.9 percent respectively.  Substantial transfers to government corporations, higher personnel expenditures, and faster utilization of cash allocations by line agencies (typically observed in the third month of the quarter) all buoyed spending in the said time period. In particular, some of the major expenses that contributed to the growth in spending are the following:

The spending data in June 2017 is a testament to the prudent reforms implemented by the DBM as well as the improved budget utilization of line agencies. “Government spending for the year started a little slow as expected. Line agencies were still adjusting with the new administration, and they were easing into their programs and projects under the 2017 Budget,” said DBM Secretary Benjamin Diokno. “However, as the agencies continue to improve in their performance, government spending is picking up with actual disbursements in the first semester of FY 2017 practically mirroring the program – the variance is minimal at P5.9 billion or 0.4 percent,” he added.

“It is encouraging news that we are on track with our disbursement program. The DBM and the line agencies will continue to monitor and coordinate in our efforts to put an end to underspending so we can realize our disbursement target for the year,” Secretary Diokno elaborated.

The full report on the National Government Disbursement Performance for June 2017 can be accessed through: http://www.dbm.gov.ph/wp-content/uploads/DBCC/2017/Highlights%20of%20NG%20Disbursements_as%20of%20June%202017_for%20posting.pdf. 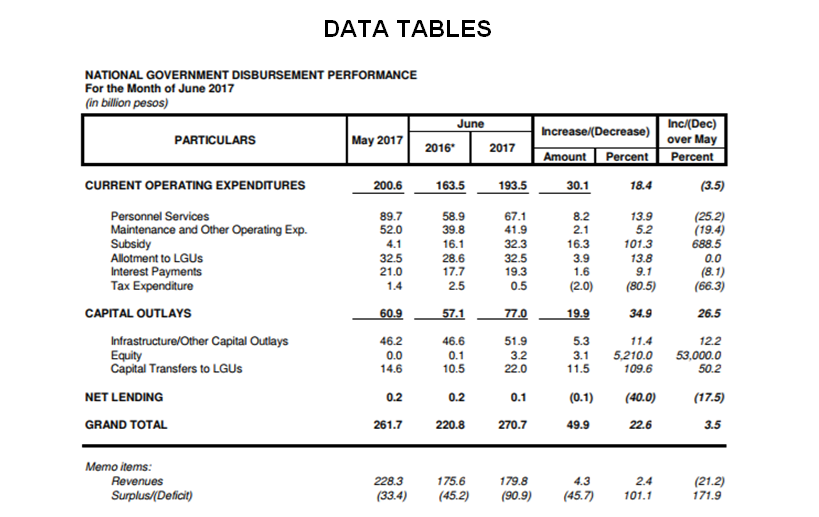 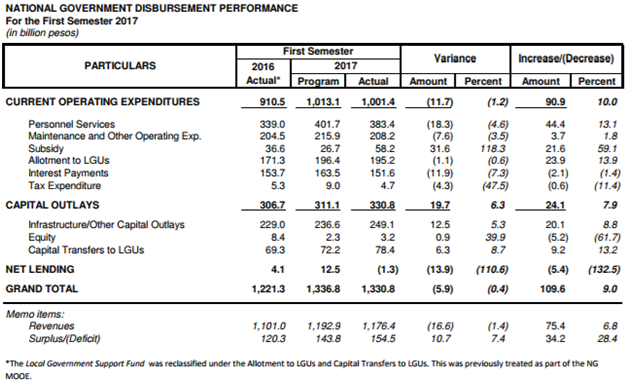