Government spending in 2017 up by 11%; underspending net of interest payments cut to 2% 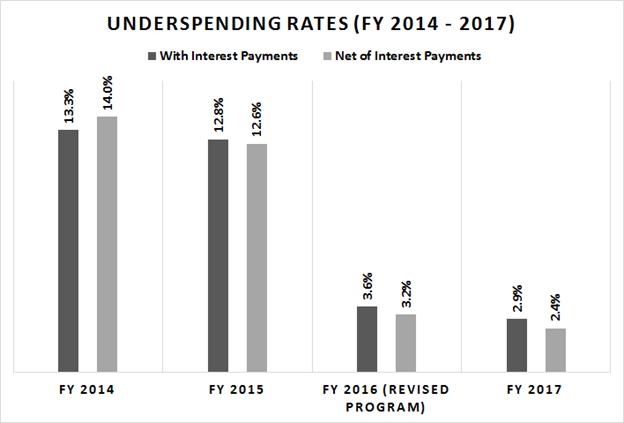 Government spending in December 2017 amounted to P330.2 billion, registering a robust 17% year-on-year increase, on account of strong infrastructure spending and higher subsidies to government corporations. This also puts government disbursements for fiscal year 2017 at P2.824 trillion, an impressive 11% increase versus 2016.

“We are glad to report that the fiscal program of the government is in full swing and that underspending had been trimmed to a mere 3% in 2017 if interest payments are included and 2% if excluded,” said Department of Budget and Management (DBM) Secretary Benjamin Diokno. “This is a remarkable feat given the size of our budget and issues of underspending in the past,” he added.

“The government’s role in promoting growth with equity will only be enhanced given the timely use of  public funds,” the Budget Chief elaborated.

The significant increase in disbursements for December 2017 is a result of higher capital spending in line with the Build Build Build program of the Duterte Administration. Infrastructure and Other Capital Outlays reached P82.3 billion in the said month, posting a 23% year-on-year growth.

This covers road infrastructure projects, including the construction, improvement of roads, and replacement of bridges in Luzon, Central Visayas, and Mindanao; flood control projects and rehabilitation of dike and river basins in Pangasinan (Pampanga and Nueva Ecija) and NCR (Marikina, Valenzuela, and Quezon City); and projects for the AFP Modernization Program, particularly the acquisition of munitions, and purchase of engineering and ICT equipment.

Similarly, Maintenance Expenditures reached P62.3 billion for a 28% year-on-year increase. This is a result of spending for the social protection programs of the Department of Social Welfare and Development (DSWD), especially for the relief operations in Marawi. The implementation of scholarship programs of the Commission on Higher Education (CHED), community-development programs of the government such as the Payapa at Masaganang Pamayanan Program of the Office of the Presidential Adviser on the Peace Process (OPAPP)  and the performance-based grants to qualified local government units of the Department of Interior and Local Government (DILG) also contributed to the increase in maintenance spending.

Infrastructure spending amounted to P568.8 billion for an annual increase of 15%. The upward trend in capital outlays is proof of the roll-out of the Duterte Administration’s ambitious infrastructure program.

Personnel Services also reached P808.4 billion or a 12% increase compared to 2016. In general, it is due to the creation and filling of positions at the Department of Education (DepEd) and the State Universities and Colleges (SUCs), the Department of Health (DOH) and police officer positions for the Philippine National Police (PNP). The increase is also a result of the second tranche implementation of the Compensation Adjustment pursuant to Executive Order No. 201, s. 2016.

Other expense items which contributed significantly to the growth of 2017 spending include: Subsidy contributions to GOCCs (P131.1 billion, 27% year-on- year) mainly for housing programs, irrigation projects, and health insurance; and the Allocations and Capital Transfers to LGUs (P530.1 billion, 15% year-on- year) due to the higher shares of LGUs from the internal revenue collections and from the developmental transfers from the National Government through the Local Government Support Fund.

“Underspending, defined as the deviation of actual from programmed disbursements, has been cut down to 2% if interest payments (IP) were excluded and 3% if IP were included,” said Sec. Diokno.

If we use the original fiscal program in 2016 set at P2.995 trillion, the assumptions of which were used to approve the 2016 Budget, then underspending had reached 14.9% that year,” the Budget Secretary explained.

“Of course you know that the fiscal program was adjusted with the transition in government and as the new members of the DBCC evaluated the mid-year performance of government disbursements in 2016,” he added. “But viewed in this perspective, it makes the disbursement performance for 2017 all the more impressive,” Sec. Diokno elaborated.

For the full report on the performance of national government disbursements, visit: https://www.dbm.gov.ph/wp-content/uploads/DBCC/2017/Highlights-of-NG-Disbursements_as-of-December-2017_for-posting.pdf