National government spending sustained its upward momentum as total disbursements reached PhP 298.8 billion in November 2018, up by PhP 46.7 billion or 19%, year-on-year. This puts spending from January to November 2018 at PhP 3.095 trillion, higher by PhP 601.7 billion or 24% compared to the same period in 2017.

“We have an expansionary fiscal policy so we can upgrade our public infrastructure, as well as provide our people with quality and accessible healthcare, education, and poverty-reduction programs,” said Budget and Management Secretary Benjamin E. Diokno. “With the pace of public spending, it is clear that the government is following through with its ambitious plans, especially Build Build Build,” he elaborated.

In turn, infrastructure spending has already reached Php 728.1 billion in the first eleven months of the year, recording a substantial PhP 241.6 billion or 50% increase when compared to the levels recorded for the same period in 2017.

Aside from capital spending, Personnel Services also jumped by PhP 24.7 billion or 25% in November 2018. This is owing to the release of year-end bonuses, equivalent to one-month basic salary, for both uniformed and civilian government employees; the creation and filling of positions in the Department of Education, Philippine National Police, and the Department of Health; and the release of pension, retirement, and gratuity benefits in various agencies.

From January to November 2018, spending on Personnel Services has totaled PhP 884.7 billion, up by PhP 168.0 billion or 23%, year-on-year. The increase is primarily driven by higher salaries for both civilian government employees and military and uniformed personnel, alongside the faster rate of filling of positions by various line agencies.

“We are optimistic about the full-year 2018 spending outturn,” said Secretary Diokno. “Public spending remains robust as we’ve managed to channel more resources to the government’s priorities,” he added. “The 2018 full-year numbers, including the assessment of national government disbursements, should be out by the first quarter of 2019,” he concluded. 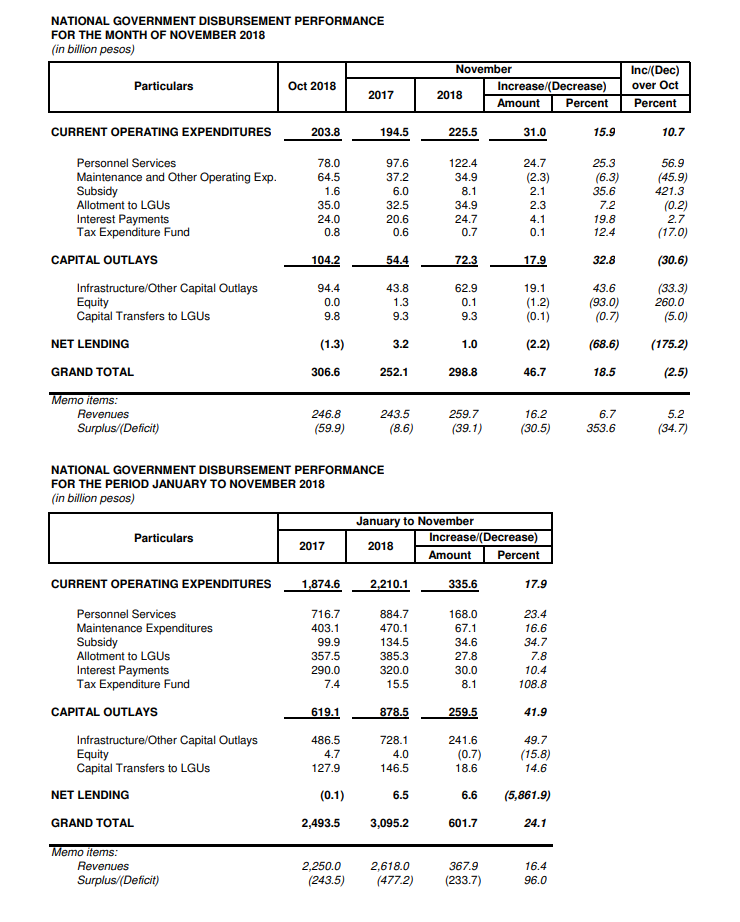