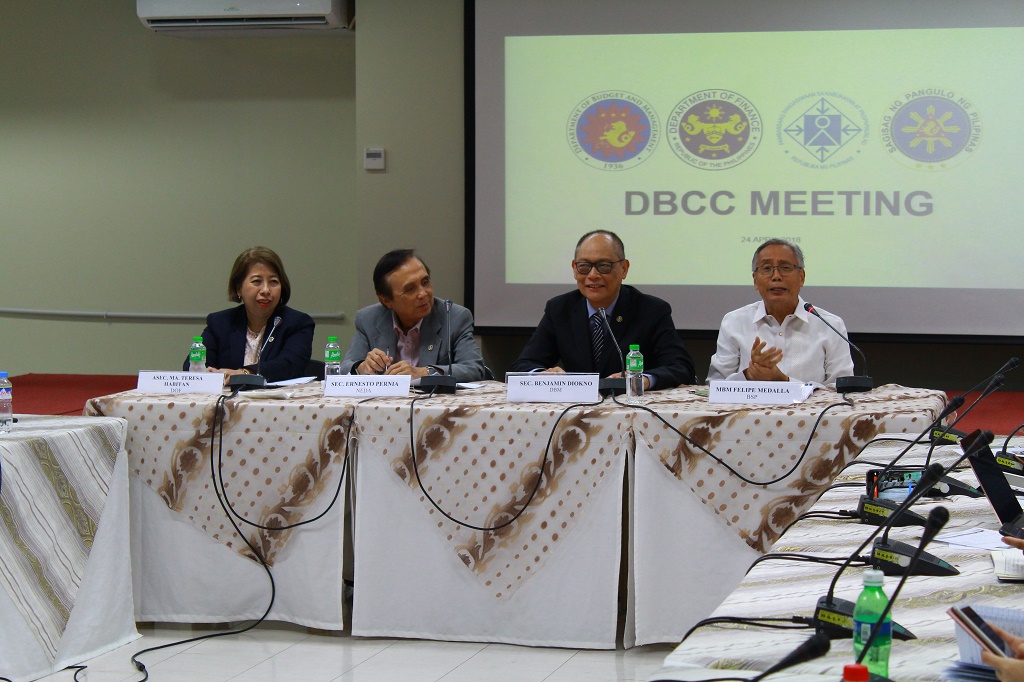 MANILA--Earlier today, the Development Budget Coordination Committee (DBCC), chaired by Budget and Management Secretary Benjamin E. Diokno, updated the medium-term fiscal program of the government in time for the preparation of the 2019 National Budget. Aside from the Budget Secretary, Finance Secretary Carlos G. Dominguez and Socio-economic Planning Secretary Ernesto M. Pernia were also in attendance for the 172nd DBCC meeting.

“The projected increase in the government’s revenue take arising from the implementation of the Tax Reform for Acceleration and Inclusion (TRAIN) Law and the succeeding packages of the Comprehensive Tax Reform Program (CTRP) strengthens the good fiscal position of the Duterte administration, which will let it pursue an aggressive investment policy anchored on much higher spending on infrastructure and human capital development over the medium term,” said Finance Secretary Dominguez.

“The improved fiscal program of the government, particularly the Build Build Build initiative, is expected to boost economic expansion from 2018 to 2022,” said Budget Secretary Diokno. “We are on track to hit our fiscal targets especially with our shift to cash-based budgeting starting FY 2019,” he added.

Meanwhile, the financing program for FY 2018 follows a 65-35 mix, in favor of domestic borrowings. With the pre-funding exercise in the sale of treasury bonds in FY 2017, there is a lower requirement for local financing in 2018. At the same time, the government will then adhere to a 75-25 mix from 2019 to 2022 as the government is diversifying its investor base and tapping to new markets to meet its financing requirements at the most cost efficient manner. The debt-to-GDP ratio is also projected to continue its decline from 42.1% in end-2017 to as low as 38.9% in 2022.

Lastly, the DBCC maintained the government’s economic growth target in the medium-term at 7% - 8%. “Maintaining our growth target for 2018 will make us work harder in reaching our medium-term goals,” said Socio-economic Planning Secretary Pernia. “Regarding the possible shortfall in tourist arrivals due to the Boracay closure, DOT will have to step up its efforts at advertising and marketing our several other tourist destinations, so the same volume of tourists, if not more, will be diverted to these other beautiful locations,” he added.

“All the efforts of the government are expected to drive socio-economic development where the poverty rate is targeted to decline from 21.6% in 2015 to at least 14% by 2022,” Secretary Diokno concluded.