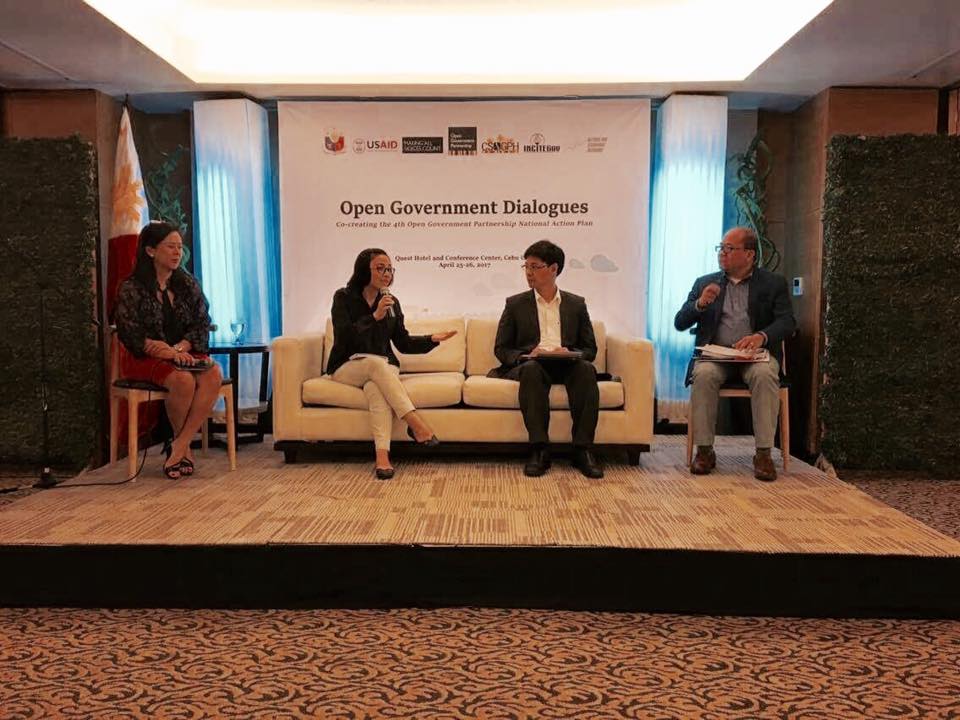 On Tuesday and Wednesday (April 25-26) last week, more than a hundred representatives from civil society organizations (CSOs), the academe, business sector, and local government gathered at the Quest Hotel in Cebu City for the Visayas leg of the Open Government Dialogues, the series of consultations which engages Filipino citizens in participatory governance.

Organized and facilitated by the Philippine Open Government Partnership (PH-OGP) Secretariat, the Open Government Dialogues – Visayas Regional Cluster is the second meeting in the regional consultations with several objectives, one of which is creating, collecting public feedback on, and implementing by July 2017 the PH-OGP Action Plan that will be “more responsive to the needs of the Filipino people” and “attuned with the development and governance goals of the country”, according to Department of Budget and Management(DBM) Secretary and PH-OGP Lead Minister Benjamin E. Diokno.

“A shared responsibility in crafting a national action plan also better ensures commitment by each participant to the achievement of the goals,”Sec. Diokno also emphasized in his welcome remarks at the start of the program.

Other goals of the consultations areto promote and disseminate information on the current Philippine Development Plan (PDP), the 2017 National Budget, the Open Government Partnership platform,as well as other participatory governance initiatives of the government.

The regional meet also serves as the venue where stakeholders are provided an update on the status of Philippine OGP commitments.

Government officials from the Office of the Cabinet Secretary (OCS), led by Undersecretary Gloria Mercado; the Department of Finance (DOF), represented by Undersecretary Karl Kendrick Chua; the National Economic and Development Authority (NEDA); and the Department of Budget and Management (DBM), headed by Sec.Diokno, organized the public presentations and facilitated the panel discussions and open fora.

The program for Day 1was composed of a presentation on the Philippine Development Plan (PDP) 2017-2022 by NEDA Director Thelma Manuel and on the FY 2017 National Budget by DBM Director Rolando Toledo. These were followed by an overview of the Open Government and Tax Reform by Development Alternatives Incorporated (DAI) representative, Relly Fajardo, and a presentation on the Comprehensive Tax Reform Package by DOF Undersecretary Karl Kendrick Chua. Lastly, Marianne Fabian of DBM and PH-OGP Secretariat facilitated the discussion on the OGP and the 4th National Action Plan.

Day 2 of the event held the breakout session for the Action Plan Development and the voting for the top three initiatives, followed by the the discussion of the next steps to take.

The final PH-OGP Plan is set for submission by the PH-OGP Secretariat to the OGP on or before June 30, 2017. Implementation will begin by July 2017.

The first public consultation, the Mindanao Regional Cluster, was held on March 22 in Davao City. The third and final meet, the Luzon leg of the Open Government Dialogues, will be held on May 18-19 in Manila.

For more information on the 2017 National Budget, visit www.dbm.gov.ph.