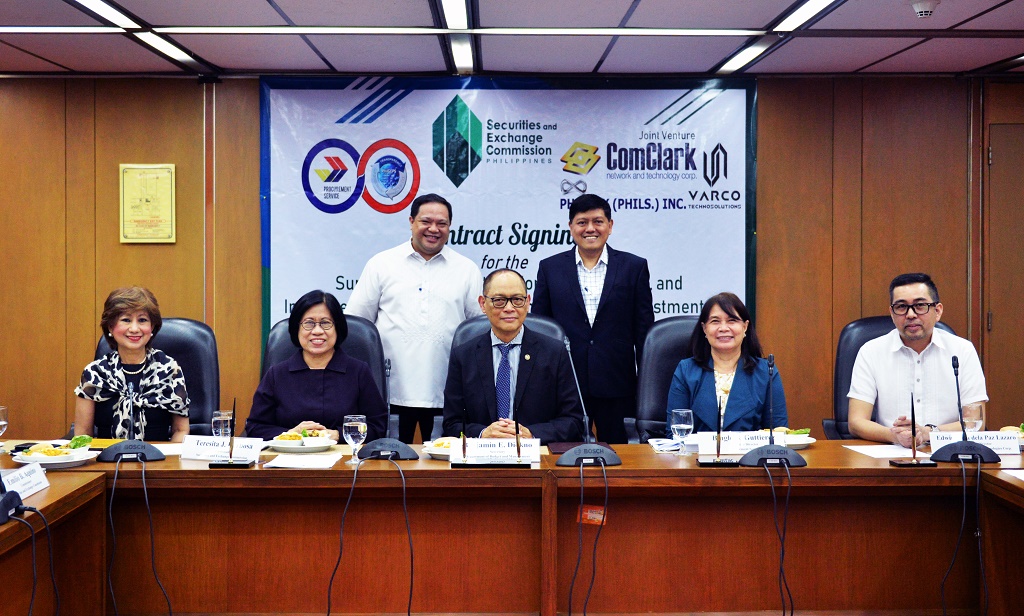 The CIFSS will function as the SEC’s central database and processing software for all the data that it receives from all the corporations it monitors. The system will feature an online submission facility. This allows uploading of files — such as, General Information Sheets (GIS), General Form of Financial Statements (GFFS), and Special Form of Financial Statements (SFFS) files —   through a web interface.

The technical capability needed to mount the system will be provided by a Joint Venture between three companies — Comclark Network and Technology Corporation, PhilCox, Inc., and Varco Technosolution. Mr. Edwin Lazaro represented the Joint Venture during the contract signing.

In his message of support, the Secretary discussed the importance of the CiFSS in enforcing transparency and efficiency in the processing and use of information of the SEC.

“In the era of Freedom of Information, this is an all too important step in making sure the large amounts of data we have can be translated into useful information for those who wish to use them,” he said.

He also noted how the web-based system will “open up avenues for economic research on Philippine Corporations”.

Director Mitch Abdon of the Department of Finance offered their agency’s own experience to prove the usefulness of SEC data.

“Data from Securities and Exchange Commission (SEC) has been very helpful to the Department of Finance in preparing the background research for Package 2 of the Comprehensive Tax Reform Program (CTRP),” she said in a statement on behalf of Undersecretary Karl Chua.

Package 2 of the CTRP aims to lower the corporate income tax rate and modernize fiscal incentives to make the system performance-based, targeted, time-bound, and transparent, and with the end goal of accelerating economic progress.

In closing, Secretary Diokno wished the SEC, who he called the “most important beneficiary of the program” success in its implementation.

“Hopefully, the SEC will use the information available to them through the CiFFS to better fulfill their mandate,” he said.