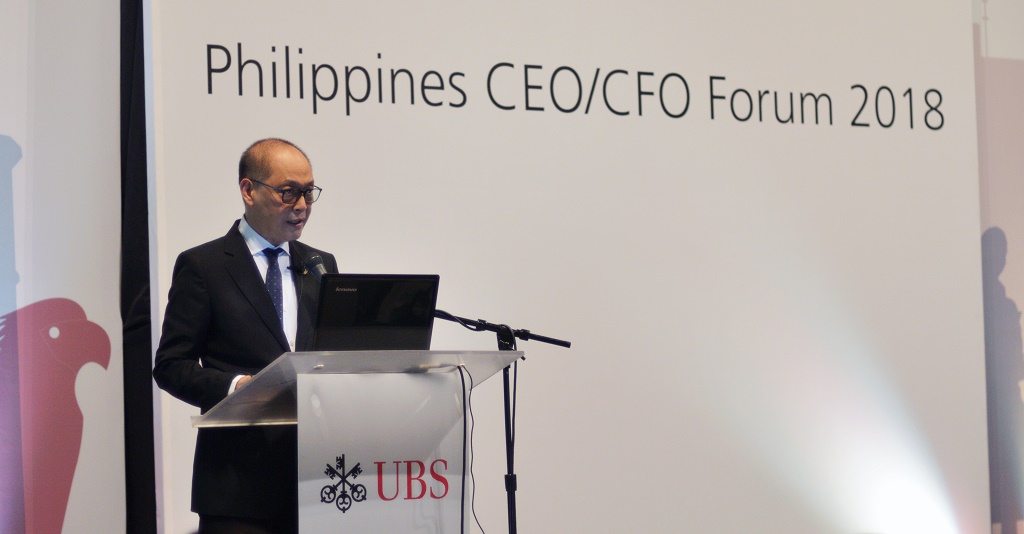 Last Wednesday, February 28, Budget Secretary Benjamin E. Diokno met with investors and private sector representatives at the UBS Philippines CEO/CFO Conference 2018. The conference was held at the Peninsula Manila Hotel for which the DBM Secretary was the speaker at the luncheon session.

Secretary Diokno explained before the investors the medium-term fiscal strategy of the government geared to achieve the Duterte Administration’s goals of achieving growth with equity. “Our goals are very ambitious, but goals we intend to realize nonetheless,” said the Budget Secretary. “In measurable terms, this is to achieve annual growth of 7% to 8% in the medium-term and to reduce poverty from 21.6% in 2015 to 14% by 2022,” he added.

He added that the government is embarking on an expansionary fiscal policy where the planned deficit has been increased from 2% to 3% of GDP. “We plan to keep the deficit at this level until 2022 to finance our development priorities, namely infrastructure and human capital development,” said Sec. Diokno. “Given the pressing needs of an emerging economy like the Philippines, this deficit level is justified and sustainable,” the Budget Chief said.

Nevertheless, Sec. Diokno assured the investors that the medium-term fiscal plan is prudent and sustainable. “For one, we have adopted an 80-20 borrowing mix in favor of domestic borrowings,” he said. “This approach will strike a perfect balance between taking advantage of favorable borrowing rates abroad and guarding against foreign exchange risks,” he mentioned.

At the same time, the DBM Secretary pointed at the progressively declining debt-to-GDP ratio of the economy. The figure currently sits at about 40% and is expected to decline to 38% by 2022. “Simply put, the Philippine economy will outgrow its debt burden,” Sec. Diokno said.

At the same time, the Budget Secretary pointed at the Tax Reform for Acceleration and Inclusion (TRAIN) as an important aspect of the fiscal strategy. “To complement our borrowings, the government is also in the process of reforming the tax system for a simpler, fairer, and more efficient tax regime,” Sec. Diokno said. “TRAIN will finance our development priorities as 70% of incremental revenues will fund Build Build Build while the balance will finance social services,” he added.

Finally, Secretary Diokno gave updates on the flagship infrastructure projects of the government. He cited that many projects are due for implementation in 2018, such as the PNR North (1 and 2), the Metro Manila Subway Project, the Mindanao Railway, among other projects which are already ongoing at the moment.

“We will not let up with the Build Build Build initiative,” he said. “Infrastructure and other capital outlays increased by 15.4% in FY 2017, which reached P568.8 billion,” he added. “We have also cut down underspending to a measly 2% net of interest payments and 3% if interest payments are included,” he elaborated. “Looking ahead, we plan to effectively extinguish underspending,” he mentioned.

The robust increase in disbursements for FY 2017 bodes well for the government’s expansionary fiscal policy. For FY 2018, total disbursements are targeted to reach P3.3126 trillion, with infrastructure and other capital outlays amounting to P777.9 billion.