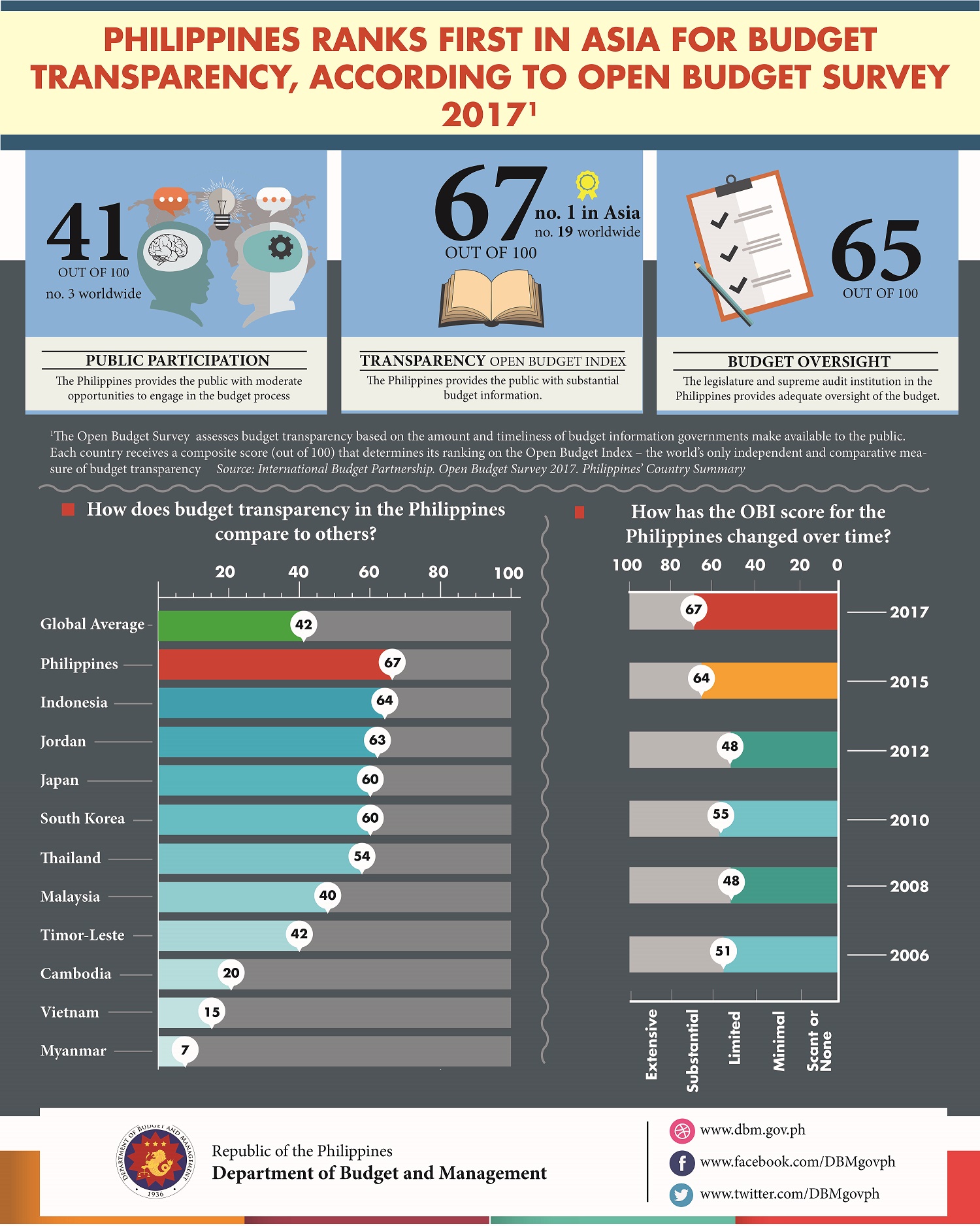 The results of the Open Budget Survey (OBS) 2017 have been released with the Philippines receiving an Open Budget Index (OBI) of 67, effectively securing the top spot in Asia for budget transparency.

“We’re very proud of what we’ve accomplished to date. In surpassing our Asian neighbors, we have further cemented our position as a global leader in Open Government. It encourages us to persevere, to do even better, in the years ahead.” Budget Secretary Benjamin Diokno said.

The Philippines ranks 19th worldwide. The Global Average for the OBI in 2017 is 42.

In 2015, the Philippines ranked first in the ASEAN region, second in Asia after South Korea (65), and 22nd worldwide.

The Open Budget Survey (OBS) is a biennial survey conducted by the International Budget Partnership (IBP) which assesses budget transparency based on the amount and timeliness of budget information governments make available to the public. After being evaluated against 109 equally weighted indicators, each country receives a composite score (out of 100) that determines its ranking on the OBI.

The survey also measures the extent of public participation in the country’s budget process and budget oversight by the legislature and the Supreme Audit Institution (SAI).

The Philippines’ boasts a score of 41 for Public Participation, more than three times the global average at 12. It is one of only four countries to achieve a moderate score in the category, sharing this distinction with New Zealand, Australia, and the United Kingdom.

Meanwhile, the Philippines holds a score of 65 for Budget Oversight, with the legislature and the Commission on Audit providing adequate oversight over the budget.

“The Department of Budget and Management will continue to work with the legislature, our constitutional bodies, and our citizens to further enhance budget openness in the public sector,” the Philippines’ Budget Chief said.

The Open Budget Survey uses internationally-accepted criteria developed by multilateral organizations from sources such as the International Monetary Fund (IMF), the Organisation for Economic Co-operation and Development (OECD), the International Organisation of Supreme Audit Institutions (INTOSAI) and the Global Initiative for Fiscal Transparency (GIFT).