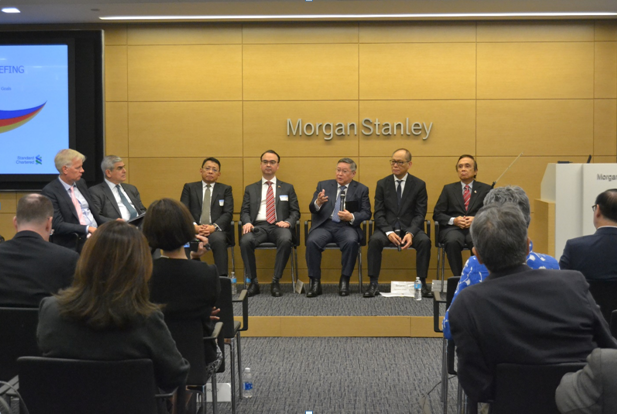 In his presentation, the budget chief discussed our expansionary fiscal policy, as well as salient points in the budget. He also emphasized legislative agenda and administrative reforms pushing for greater budget transparency and reliability.

“For the first time, the national budget will follow a program-based budgeting structure for FY 2018, for better linkage in planning and budgeting as well as transparency and better monitoring of projects that are funded by our taxpayer’s money,” the Secretary shared.

After the economic managers gave their presentations, they were joined by private sector representative Jaime Augusto Zobel de Ayala, CEO and Chairman of Ayala Corporation, for a panel discussion and open forum moderated by Jay Collins, Vice Chairman for Corporate and Investment Banking for Citigroup.

During the moderated discussion, Secretary Diokno was asked how the current administration was able to curb underspending in such a short period of time.

“The President has a strong message for the spending ministers – use it or lose it, not lose your budget, lose your job,” he answered.

Secretary Diokno also reiterated the reforms the DBM undertook to boost spending— use of technology, shift to cash appropriations, one year appropriation shelf life, among others.

The budget minister was also asked what the perceived advantages are for Hybrid PPP, the administration’s preferred mode of infrastructure development, over Traditional PPP, and the role of the private sector given this arrangement.

According to Secretary Diokno, financing and planning – ‘feasibility studies and detailed engineering’ – will be done by the government, while construction and operation and maintenance will be bid out to the private sector.

“[The Build, Build, Build team] would like to argue [hybrid PPP] takes less months to mount and is less expensive than the traditional PPP,” he said. “Traditional PPP it takes 29 months from project Identification until the first shovel hits the ground.”

He also said that use of facility will be more affordable with the public sector shouldering costs.

“With hybrid PPP, the cost of financing is lower, say in the neighborhood of 2%, long term, say 30 to 40 years. Which private company can borrow under those terms?”

The budget minister also shared two other key differences between the project approval and financing arrangement under this administration and the previous administration – first, that they are open to unsolicited proposals, subject to Swiss challenge, and second, that PPP projects will not be used as a way of raising resources for the government.

“The previous administration would grant a project to a contractor who can offer the highest premium. That’s tantamount to “taxation without representation” and a sure guarantee that the user charge to a facility is much higher than the full costs of the project,” the Secretary said.

The economic managers took the opportunity to give the briefing to US-based portfolio and direct investors on their way to World Bank-IMF Annual Meeting in Washington D.C. The briefing was organized by Bangko Sentral ng Pilipinas, Morgan Stanley, Deutsche Bank, Citibank and Standard Charter Bank