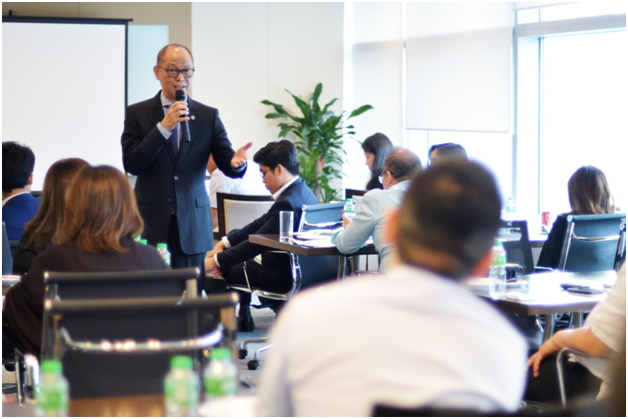 On September 2, 2017, DBM Sec. Benjamin Diokno spoke in front of local and foreign analysts of UBS to discuss the Duterte administration’s economic plans, with emphasis on the FY 2018 National Budget, the administration’s Golden Age of Infrastructure, and budget and governance reforms.

The UBS Macro Tour is a series of discussions and presentations on the state of the Philippine economy, which features key people in government as keynote speakers.

Sec. Diokno highlighted that the FY 2018 Budget, which amounts to PHP 3.767 Trillion, is consistent with the sustainable budget strategy. The expansionary fiscal policy will still result to a declining debt-to-GDP ratio over the medium term.

The DBM Secretary further clarified that while this massive spending for the Golden Age of Infrastructure shall be financed through fiscal deficit spending and an 80-20 borrowing mix in favor of domestic sources, the Philippines’ debt position remains manageable. This borrowing mix minimizes foreign exchange risks, while taking advantage of favorable terms offered by foreign loans.

Hence, the Budget Chief maintained that the Philippines’ debt position remains manageable, as our economic growth will definitely outpace our debt burden. This is to allay fears that the Philippines will be deeply indebted due to this debt financing strategy.

In terms of budget and government reforms, Diokno highlighted the the National Government Rightsizing Act, which aims to enhance the government’s institutional capacity and improve public service delivery. He also discussed some of the implications of the Budget Reform Bill, which seeks to shift the current budget system from obligation-based to cash-based. Through this reform, Diokno noted that there will be more efficiency in project implementation, as government agencies will be forced to hasten the start of their projects, rather than merely obligating it. Lastly, Diokno also touched on the Uniformed Personnel Pension Reform, which will adjust the pension rates for uniformed personnel.

In brief, Sec. Diokno highlighted that the Philippine economy remains on track and is expected to grow even more in the coming years. With various government reforms also in place, Diokno assured the members of the business community that the Philippines will remain as one of the strongest economies in this region.