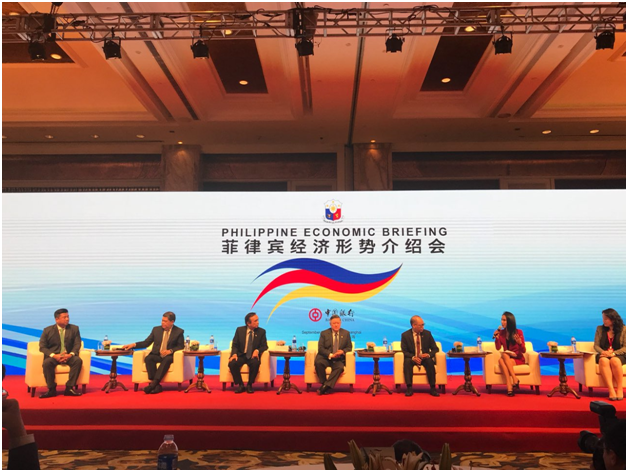 The economic managers of the Duterte cabinet headlined the Philippine Economic Briefing in Shanghai, China on September 29 in a bid to win over investors and share the rosy prospects of the country’s economy.

On the heels of robust growth clocking at 6.4 percent for the first half of 2017, Secretary Benjamin Diokno assured foreign investors that the Philippines is a worthy investment destination. “Welcome to the fastest growing country in the fastest growing region in the world,” said the Budget Secretary referring to the Philippines’ strategic position as part of the rapidly growing ASEAN region.

In his presentation, Sec. Diokno laid down the Duterte Administration’s fiscal strategy and budget reforms to attain sustained economic development. He highlighted the expansionary fiscal policy that will free up resources for the government’s ambitious infrastructure program, fondly called “Build BuildBuild”. This will be made possible by expanding the deficit from 2 to 3 percent of GDP, in tandem with increased revenue collections via tax policy and tax administration reforms.

“In the medium term, we will spend P8 to P9 trillion or $160 to $170 billion on public infrastructure,” said the Budget Secretary.

Furthermore, he highlighted implementation reforms that will lead to improved budget utilization and more accountable governance. He stressed that the Administration is characterized by its willingness to get things done swiftly and effectively. And as one of the DBM’s proposed reforms, Secretary Diokno cited the landmark Budget Reform Bill.

“The Budget Reform Bill is one of the game-changing reforms we are advocating. It will mandate an annual cash-based budget while ensuring that all our future budgets will be fully compliant with pertinent laws and regulations,” he said.  “It will institutionalize modern budgetary practices and secure the irreversibility of reforms that have been instituted.”