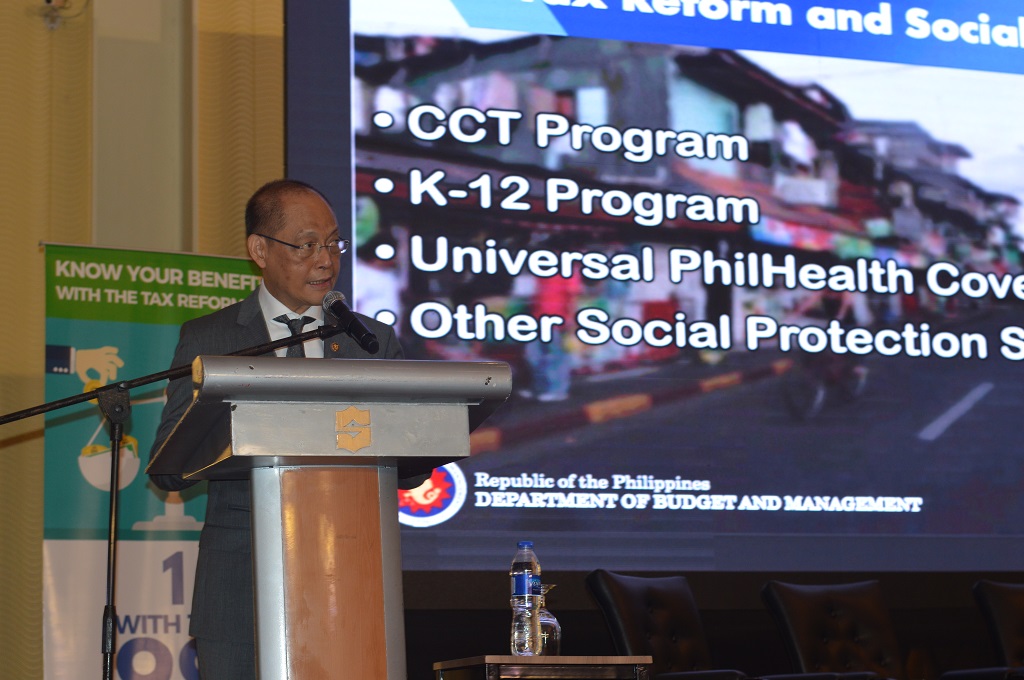 On July 5, 2017, DBM Secretary Benjamin Diokno, together with  DepEd Sec. Leonor Briones, NEDA Usec. Rosemarie Edillon, DOH Usec. Achilles Bravo, DPWH Usec. Maria Catalina Cabral, and DOTr Usec. Reinier Paul Yebra, outlined the various implications of the proposed Tax Reform to Filipinos. Headed by the DOF, the “1 with the 99: A Forum on Tax Reform” was held in the EDSA Shangri-La Hotel in Mandaluyong, and resource speakers from various government agencies were invited to explain the practical ways that the Tax Reform will be advantageous to the general public.

Sec. Diokno particularly highlighted the benefits of the Tax Reform for Acceleration and Inclusion (TRAIN) program and its benefits to the people and the economy. He focused on the role of the DBM in the delivery of infrastructure projects and programs on social services, especially the mitigating measures that shall be funded with the revenues from the Tax Reform program. According to Sec. Diokno, “Tax reform will help government finance the delivery of essential public services. In particular, it will help us achieve our goals to upgrade public infrastructure and to develop our young population into an agile and competent workforce.” Diokno is firm that these two development priorities are pertinent in boosting the status of the Philippine economy to ultimately reduce poverty to 14 percent by 2022.

Diokno further explained that additional government revenues from the Tax Reform will aid in revitalizing the public transport system. “For the next six years, we will spend about P8 to P9 trillion for public infrastructure. The “Build, Build, Build” program is easily the most ambitious infrastructure program in recent Philippine history. And a large part of its success (or failure) will lie with the passage of Tax Reform,” the DBM Secretary elaborated.

In terms of social services, Diokno further reiterated on the current administration’s commitment to improve the welfare of the poorest Filipinos. He explained that the total budgetary allocation of banner social programs – Pantawid Pamilyang Pilipino Program, National Health Insurance Program, Health Facilities Enhancement Program and Basic Educational Facilities Program – shall reach P322 billion in 2018, which is more than seven times its allocation in 2011.

Furthermore, for the first four years of the implementation of the tax reform, 40% of the incremental revenues from the oil excise will be used to fund potentially five social mitigating measures: the Targeted Cash Transfer program, Pantawid Pasada, Pantawid Kuryente, the PUV Modernization Program, and the Social Welfare Card System.

Diokno elaborated that the Targeted Cash Transfer program would benefit the poorest 10 million households – the bottom 50%. The said program shall be an unconditional cash transfer of PHP 200 per month or PHP 2400 per year.

Meanwhile, the Pantawid Pasada program is intended to benefit PUJ drivers as fuel costs are expected to increase due to higher oil excise taxes. Diokno explains that there will be cash cards worth PHP 2200 distributed monthly and per jeepney.

Diokno also elaborated on the proposed Pantawid Kuryente program, “we expect to fulfill this power subsidy program to make power costs cheaper for the people who need it most.” The Pantawid Kuryente is targeted to reach all Small Power Utility Groups (SPUG) users in lifeline areas.

For the PUV Modernization program, Diokno highlighted that the administration aims to replace 220,000 jeepneys that are more than 15 years old. These old jeepneys shall be replaced by more efficient jeeps, mini-buses or buses. Also, drivers will now have fixed wages, which is perceived to improve the welfare of our drivers.

Diokno also briefly gave the details on the proposed National ID card. He explained that the government intends to give all Filipinos a national ID that will also function as a social welfare card. This would identify the qualified beneficiaries for discounts on transportation, healthcare, transportation, and medicines

Lastly, Sec. Diokno called for public support for the Tax Reform program. The DBM Secretary is firm that the new proposed tax system is efficient and fair, “It plugs the loopholes in our tax system, while providing government with sufficient revenues to finance our spending priorities. It improves fairness since it shifts the tax burden to the top 1 percent while the welfare of the poorest segments of society is not compromised.”

“The [Tax Reform] is a win-win situation that does not come very often”, Diokno concludes.