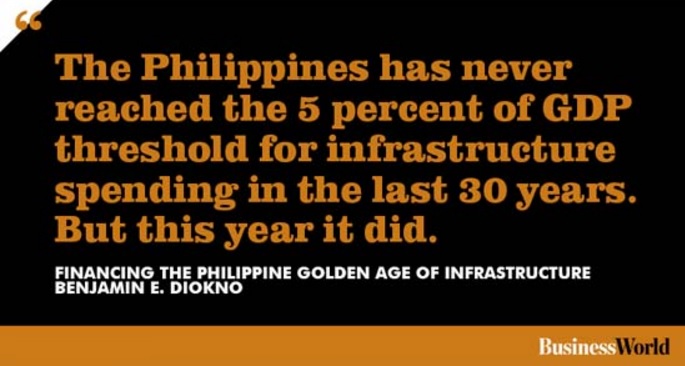 In recent years, the Philippines has enjoyed strong and sustained economic growth founded on sound macroeconomic fundamentals. Having just posted a 6.9 percent growth rate in 2016, and being strategically located in the ASEAN region, the Philippine economy is indeed “one of the fastest growing economies in the fastest growing region in the world”.

With a booming market, adequate infrastructure must be put in place to support economic activity. Good infrastructure is a necessary condition in sustaining our growth trajectory.

The harsh reality is that the poor state of Philippine infrastructure has been, for too long, a major constraint to growth. The Metro Manila traffic alone speaks volumes about the urgent need for a massive infrastructure upgrade.

According to the World Economic Forum Competitiveness Rankings, the Philippines has the worst overall infrastructure among the ASEAN-5 countries in since 2010. The country’s poor score in public infrastructure has pulled down its overall competitiveness.

This dismal state of public infrastructure cannot, and should not, be allowed to continue. Hence, the Duterte Administration has embarked on a bold ‘Build, Build, Build” program. This will usher in the “Golden Age of Infrastructure”, the boldest infrastructure development program in recent Philippine history.

And as we embark on this ambitious journey, we put our money where our mouth is. The first bold step we took was to appropriate P847.2 billion in the 2017 National Budget for infrastructure projects.

This level is equivalent to 5.3 percent of gross domestic product (GDP). This is significant because the Philippines has never reached the 5 percent of GDP threshold for infrastructure spending in the last 30 years. In fact, it only averaged 2.9 percent of GDP during the last administration when the cost of borrowing money was at its rock bottom.

Given the huge capital expenditures, the next logical question is how will the government finance such an ambitious program.

First, the economic managers have decided to pursue an expansionary fiscal strategy: the planned deficit was increased from 2 to 3 percent of GDP during the entire term of the Duterte administration.

This 80:20 financing mix is not only sound, it is manageable and fiscally sustainable. We project that the debt-to GDP ratio will decline from 42.2% in 2016 to 36.7% in 2022. With this debt profile, we earn the envy of most developed and developing countries in the world facing much higher debt-to-GDP ratios.

Third, our borrowings will be complemented by higher revenue effort resulting from tax policy and tax administration reforms. This brings to the fore the Comprehensive Tax Reform Package (CTRP) being proposed by the Department of Finance.

The CTRP is crucial not only in financing our spending priorities. On its own, it is meritorious.  It will transform the Philippine tax system into a simpler, fairer, and more efficient tax system.

The present one is outdated and out of sync with our ASEAN neighbors. It must be reformed for the Philippine economy to be more competitive and attractive to investors. Tax reform goes hand-in-hand with our infrastructure program in terms of promoting competitiveness and fueling growth.

Having explained the financing strategy, let me also discuss some implementation reforms. The Duterte administration gives great value to efficient and timely execution. Hence, we will continue to guard against underspending – the Waterloo of the previous administration.

Interestingly, last year’s spending pattern shows promise: underspending has narrowed to 3.6 percent, driven by strong spending for infrastructure and other capital outlays. This is significantly less than the 13.3 percent and 12.8 percent deviations observed in 2014 and 2015, respectively.

We will sustain this infrastructure surge given that infrastructure projects are ripe for implementation in the dry season. Once our budget reforms gain traction, we expect government spending rate to improve further.

Some of the major reforms we have put in place at the Department of Budget and Management include:

These are only some of the reforms we have introduced to the bureaucracy to improve its absorptive capacity. There will be more to come as we increase government spending, particularly infrastructure outlays.

Change has come. Soon this will be felt as the process of transforming the state of public infrastructure in the Philippines begins.  As our economy evolves into the next Asian tiger, we will make sure that infrastructure will be a driver of, rather than a constraint to, growth and development.

Soon, we will get a glimpse of what a modern Philippines would look like – a country with twenty-first-century infrastructure, better trained labor force, more decent jobs and higher wages, and effective and accountable governance; a more beautiful Philippines that is safer, fairer, and richer.

Mr. Diokno is Secretary of Budget and Management.