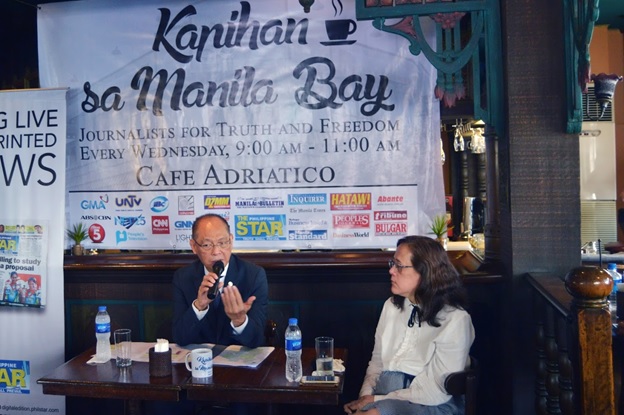 DBM Sec. Benjamin Diokno was this week’s guest at the “Kapihan sa Manila Bay” at Cafe Adriatico, Malate, Manila. The event, organized by journalists and various news outlets, focused on the discussion of developments in the country’s current national situation and budget dynamics.

Initial introductions led to talks concerning the peace and order crisis in Marawi, which caused the declaration of martial law in the entire island region of Mindanao.

Sec. Diokno highlighted that irrespective of the condition in Mindanao, there remains enough funding to sustain the development projects for the rest of the country. And with the decisiveness of the administration, it is expected that the ongoing crisis will be immediately resolved, which will help in hastening the implementation of the planned infrastructure developments in Mindanao.

Sec. Diokno also addressed the concerns regarding the administration’s refusal to accept the development assistance from the European Union. He reiterated that the said aid mostly accrues to the benefit of NGOs and sectors offering technical assistance, instead of infrastructure which is the primary focus of the current government’s spending. “Ang contribution ng EU, karamihan binibigay nila sa mga third world countries sa mga NGO’s doon, pero if with strings attached, hindi na natin tatanggapin yan [The contribution of EU is mostly given to NGO’s in third world countries, but if it shall be given with conditions or strings attached, we shall not accept that],” explains Sec. Diokno. As such, the administration’s refusal of the grant has no substantial effect on infrastructure projects. Furthermore, the conditionalities inherent to the EU aid undermines the country’s sovereignty, and the administration has repeatedly expressed that they would rather receive unconditional grants.

On the question regarding when the Philippines will operate on a balanced budget, Sec. Diokno explained that such a concept refers to the long-term. Currently, the country is in a situation wherein infrastructure is inadequate. Hence, this  deficit spending will be used to fund the infrastructure that the Philippines lacks.

The administration’s focus on infrastructure development through fiscal deficit spending is aimed towards the achievement of sustainable economic growth. With a decisive government in terms of resolving crises and other national hindrances, the Philippines can look forward to quality infrastructure and an inclusive economy where no regions and provinces are left behind.