Government spending grew a hefty 41.9 percent from April to May 2019, as shown by the data from the Department of Budget and Management (DBM).

In particular, government spending in May reached PhP314.7 billion, up by PhP92.9 billion from the amount in April. This also translates to a 7.8 percent year-on-year increase in spending (equivalent to PhP22.8 billion) for May 2019.

Notably, spending on Infrastructure and Other Capital Outlays (CO) grew by 117.5 percent, while spending on Personnel Services grew by 49.8 percent from April to May 2019.

These upsurges in disbursements reflect the initiation of the government’s catch-up spending efforts, particularly on infrastructure, that aim to accelerate economic growth in the second half of the year.

Spending growth from April to May is mainly driven by Infrastructure/Other CO spending as it hit PhP61.5 billion in May, rebounding from the 56.9 percent contraction in April.

Infrastructure/Other CO spending in May grew by PhP3.4 billion, or 5.9 percent, from the levels recorded in the same month last year.

This increase is brought by disbursements for foreign-assisted infrastructure projects of the Department of Transportation (DOTr) and the Department of Public Works and Highways (DPWH), as well as for CO projects under the Armed Forces of the Philippines (AFP) Modernization Program.

The increase in PS spending is due to the implementation of the fourth and last tranche of the Salary Standardization Law of 2016, and payment of the mid-year bonus of government employees, which is equivalent to one-month basic salary.

Another primary driver of spending growth is the substantial increase in net lending which hit PhP15.0 billion from PhP1.4 billion last year. This is largely on account of the PhP14.8 billion NG advances to the National Food Authority (NFA). The said advances are intended for the payment of NFA’s outstanding obligations as part of its debt reduction plan with the expected winding down of its operations under R.A. 11203 or the Rice Liberalization Act.

The weaker-than-expected rate of government spending for the period was attributed to the delay in the passage of the FY 2019 National Budget and the election ban from March 29 to May 12, 2019.

The budget impasse created delays in the implementation of new and ongoing infrastructure projects and of other public social services, dampening government spending enough to weigh down the country’s economic growth rate to 5.6 percent in the first quarter.

With a reenacted budget, national government agencies were unable to incur new obligations for projects intended for implementation in 2019. Instead, they could only incur obligations chargeable to the 2018 General Appropriations Act (GAA) as reenacted, which does not include appropriations for new programs, activities, and projects (PAPs).

The DBM has already processed the release of second semester cash allocations of agencies, which were credited on the first working day of July.

This will facilitate budget execution and help agencies implement their catch-up plans for their respective PAPs to accelerate the pace of government spending by the second semester of this year. 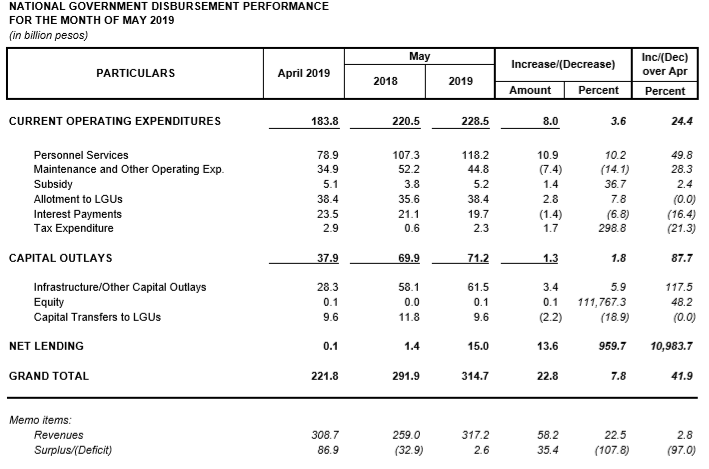 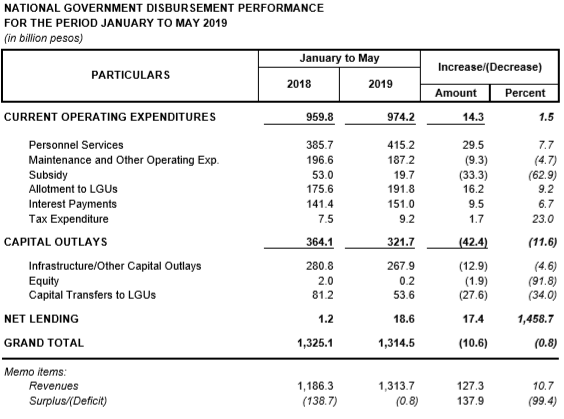