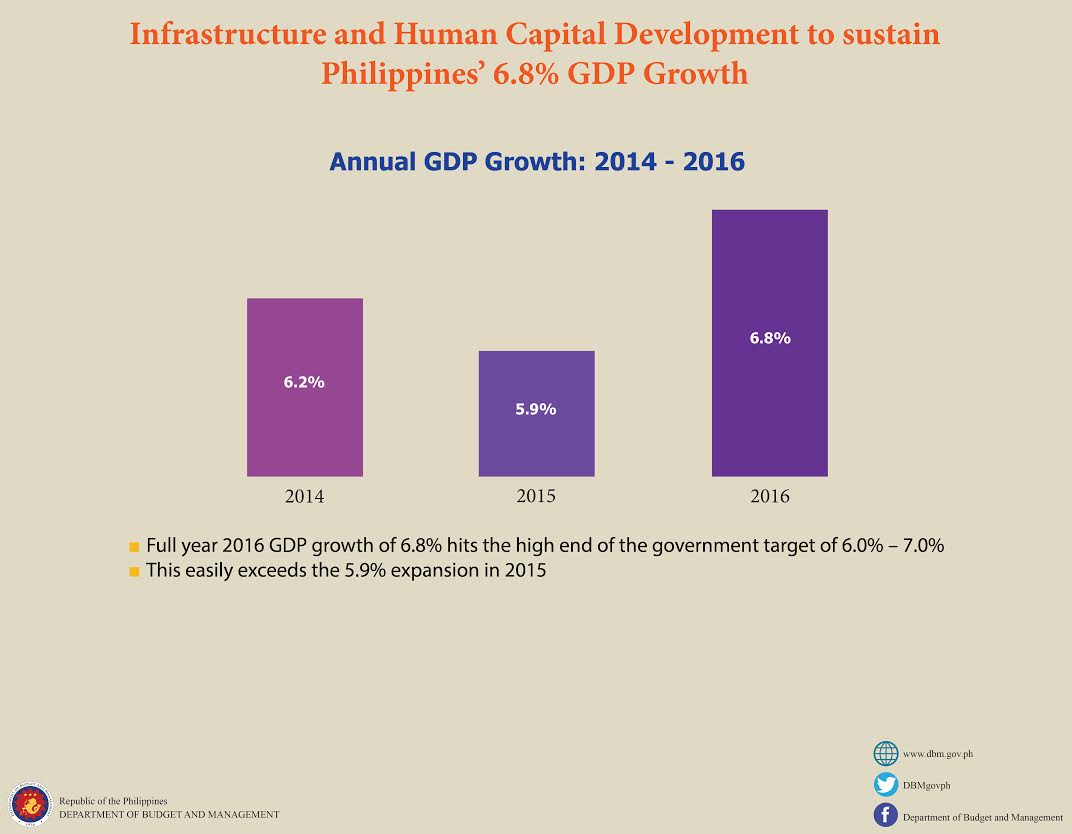 The Philippine economy posted a robust 6.6 percent GDP growth for the 4th quarter of 2016. This puts full-year GDP growth at 6.8 percent in 2016, hitting the high end of the government’s 6.0 – 7.0 percent GDP growth rate target. Such an expansion easily exceeded the annual GDP growth rate of 5.9 percent in 2015. The strong performance of the Philippine economy, anchored by the 10-Point Socioeconomic Agenda of the Duterte Administration, is a testament to its resilience and strong macroeconomic fundamentals. More importantly, this indicates the upward growth trajectory of the Philippine economy, especially with numerous reforms of the administration gaining traction.

Budget Secretary Benjamin Diokno, in particular, cited the government’s plans of investing heavily in public infrastructure and human capital development as future drivers of growth. “The National Budget for 2017 alone allocates P847.2 billion to infrastructure. This is just a down payment as we intend to spend as much as P8 to P9 trillion in public infrastructure for the next six years, raising our infrastructure spending between 5.3 to 7.4 percent of GDP. Such investments will propel us to the Golden Age of Infrastructure in the Philippines,” Diokno said.

The ambitious infrastructure plan, which will build roads and bridges to decongest urban areas, interconnect lagging regions to leading regions, and improve mobility and productivity will only serve to boost growth. The country’s infrastructure gap has long been cited as a major constraint to growth. More importantly, the thrust for infrastructure will distribute prosperity across the Philippine archipelago as the infrastructure projects for the next six years will respond to the varying needs of Filipinos across all regions and will not shortsightedly focus on Metro Manila.

Secretary Diokno also mentions developing the country’s young population in order to maximize growth. “We must invest in our greatest resource – our youth. Our population’s median age is 23 years old. Hence, we must mold them into an agile, competent and productive workforce. This means allocating adequate resources to education, healthcare, social protection, among other things. And this is exactly what we are doing – 40 percent of the P3.35 trillion budget in 2017 is allotted to social services.”